​Inverter Vs. Portable Generator​ in 2022

Have you been in search for some inexpensive power backup lately? Even without storms and other natural disasters to think of, there is always the need to have some backup should something go wrong. When you are able to make that decision and decide you need to get generators, there are two main options you will find. There are portable gensets for homes that will mostly start at around $300 and can power some devices with a few extension cords but won’t automatically start in the event of a power outage. Naturally, the price will go up if you want a generator that will kick in mechanically when your lights go off. However, if all you need is to keep the sump pump running in your basement or you want to keep food fresh in bouts of a power outage, you might consider it best to get a power inverter. Power inverters generally start at a price of $100 and they mostly depend on your car as a makeshift generator. 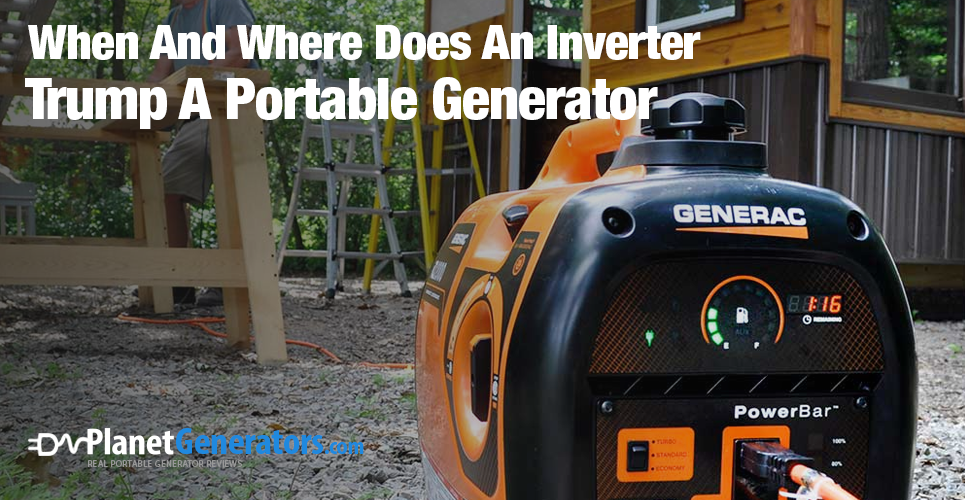 ​So, what's an inverter?

An inverter looks like a rectangular box, akin to a shoe box. The process whereby the inverter works is not as easy as it seems or sounds. However, what you need to know is that many inverter generators are unable to offer a pure sine wave (a generator produces sine waves with ease).

As soon as you have powered some little equipment, you will be pushed to plug in more into a power strip and then plug the strip into the inverter to increase your alternatives. However, unless you are only charging your phones, there is no way this will be a good idea. This is because; the inverter can extract more from the battery of your car than your car’s alternator can provide and this can drain the battery of the car really quick.

We at PlanetGenerators tested inverters both in our labs as well as the home of one of our staff who had lost power. We also talked to manufacturers and other experts in the industry. Through these tests, we found out that, inverters can maintain at least some of the important devices in your home. However, there will be the need for prioritization. Even the smallest, 900 watt PW8900-12 was capable of running a freezer, two sump pumps, two refrigerators, lights as well as a few chargers. However, you can’t do all these things together with an inverter. On the other hand, a generator of the same capacity is more than capable of handling many of these requirements in tandem.