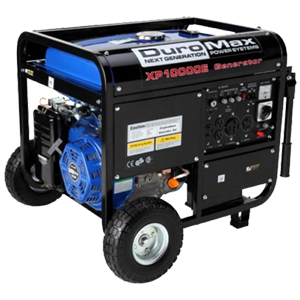 
​Great for the work site or your home, the DuroMax XP10000E features an air cooled 16 HP OHV engine that operates at 8000 Watt constant power with the ability to peak at 10,000W. This gas powered portable generator features an electric start as well as recoil start. The EPA approved design with suppressed exhaust emission and spark arrestor makes it ultra quiet and compatible with US National Park requirements.

Fully loaded, the front panel features a total of 5 sockets or points – Two 120 Volt, 20 Amp, one 30 AMP 120/240 Volt, 12 Volt DC outlet, one twist lock socket for 30 AMP and 50 AMP heavy duty socket. You can choose whether to operate it at full 120 Volt or 120 by 240 Volt thanks to the DuroMax RV Switch or voltage regulator and with the voltmeter you know when the generator is maxing out or if there is a problem with it. ​The batteries power the self-starting mechanism and when it’s not fully charged you can rely on the recoil pull cable to start it up.

​With up to 10 hours running time from 8.3-gallon fuel tank capacity at 50 percent load, muffled sound production and automatic voltage regulation with circuit breakers and socket selection, the DuroMax XP10000E is a powerhouse for work and pleasure.

Power usually does not go hand in hand with construction when it comes to portable generators. Limited in size and expense, most manufacturers tend to take shortcuts when it comes to the motor or the materials used for construction. The DuroMax XP10000E, on the other hand, ensures optimum performance, loads of unadulterated power, consistent performance and a sturdy working frame.

It is not cheap by any means but for the price you pay, it can power your entire house and a couple of air conditioners at the same time and still have a little juice left to charge some batteries. I have tested it with everything I could find and yet came out short in trying to twitch the voltmeter towards the red zone. In fact, my living room window air conditioner is rated at 30,000 BTU, which is something that no generator managed to run without whining. The DuroMax XP10000E did not even bother with sputtering when it fired up my air conditioner. Two hours straight and not a single twitch in the needle of the voltmeter. I am really impressed with the amount of power and run time I can get out of the DuroMax XP10000E.

With so much power, I expected the generator to be huge, heavy and noisy. Well, it is kind of huge even for a portable machine and it is heavy but it’s definitely not noisy. In fact, it purrs as much as a lawnmower would, so you can take it along in your RV or out camping without having to worry about irritating neighbors. The only real concern for me was the battery that tends to keep dying out on me. Sometimes it charges and at other times it shows only half charge. Thankfully, you get a recoil starter with the DuroMax XP10000E, which by the way is very receptive. 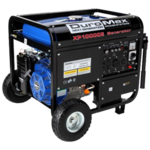 DuroMax XP10000E Review
Portability7
Power9.8
Noise8.5
Efficiency9.5
8.7
EXPERT SCORE
FINAL THOUGHTS
10,000 peak output, ability to power 50Amp heavy duty tools and 10 hour plus operation times with just 8.3 gallon full tank capacity. The DuroMax XP10000E is no slouch when it comes to powering an entire household. It is designed to go on and on, regardless of how you use it.
Avaliable on Amazon
Check Price