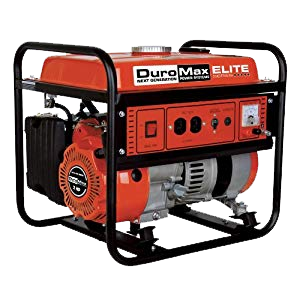 
​A reliable model, the DuroMax Elite MX4500E, is a 7 HP generator that manages to churn out a constant 3500 Watt of power and 4500 Watt peak wattage. This is a portable generator capable of operating as a home back-up unit, job site stand-by, RV and camping generator and is overall designed to provide power where it is most necessary. Replete with a low oil-shut down sensor, air cooling and 4 gallon gas tank, it operates for a rigorous 8 hours when half loaded.

The control panel is completely loaded with controls that let you perform keyed starting, switch power through a RV switch, check on the voltage with the volt meter and also shut-down the engine. Alongside all these controls there are two 120 Volt 3 Prong 20 Amp sockets and one 240/120 Volt 30 Amp Twist Locking outlet certified by NEMA. It features a full isolated steel roll cage with a heavy steel frame and helps protect it from accidents.

As usual let’s begin with the power output and its load capabilities. The 7 HP air cooled engine is a beauty in itself. With such a small framework and compact size, it manages to churn a decent 4,000 starting watts. And it manages all this whilst operating with an electric start mechanism, the battery obviously being charged automatically while the generator runs. I found it was capable of powering my plethora of kitchen appliances including the double door refrigerator. And, as you start getting closer to the 3,500 continuous wattage limitation, the heavy load light starts to flicker. If you push it beyond its capacity, it then automatically shuts down.

Coming to the ergonomics, the design is actually quite portable and with the large wheels, the well positioned engine, it is easy to tug along. I also appreciate the effort put in the DuroMax Elite MX4500E to make it less noisy at just 69 dBA. While not exactly super silent, it is much less silent than many competing affordable models.

To me the biggest attraction of this generator is its main control panel unit that comes with an engine shut-off switch, circuit breaker, volt meter and a RV switch. Plus, alongside the control panel there are all the outlets, of which I rely mostly on the 2 120 Volt units. Having used it for a good six months, I can vouch for its durability, never a leak, no engine problems and no complications whatsoever. Just remember to use it with a full gas tank as to refuel it, you have to let it cool down first. Thankfully, operating on half load, it manages a decent 8 hours on a full gas tank. While this isn’t the most fuel efficient portable generator, it more than does the job. 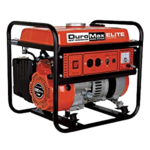 DuroMax Elite MX4500E Review
Portability9
Power8
Noise9
Efficiency7.5
8.4
EXPERT SCORE
FINAL THOUGHTS
Affordable and reliable are probably the two main terms that can be used to describe the DuroMax Elite MX4500E. This particular portable generator won’t power your entire household but when you need it, it provides just enough power to keep the lights running, power to your refrigerator and your basic appliances on. Not exactly camping friendly, it is still economical in the long run considering the durable engine design and its efficient construction.
Avaliable on Amazon
Check Price